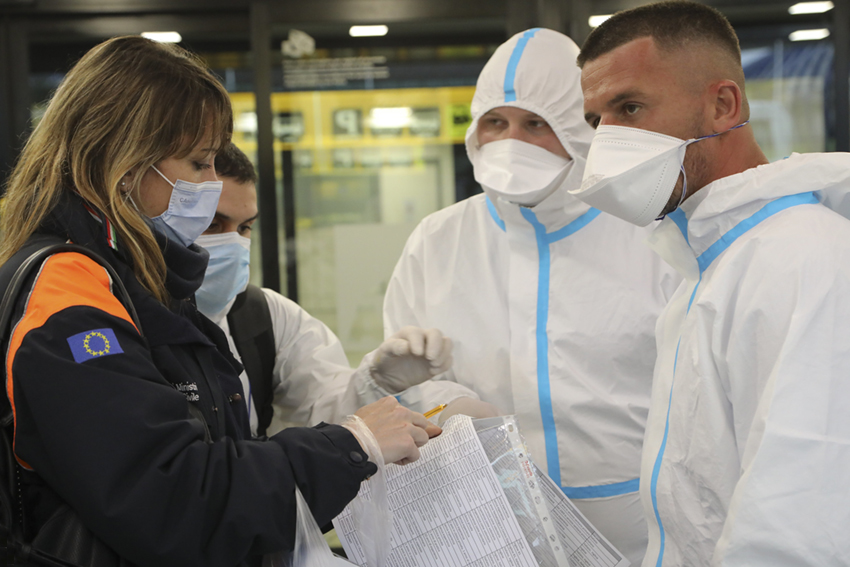 Organizing health care is one of the most complex aspects in managing disasters because structures have to ensure a rapid response, from the very first hours, to provide assistance to as many people as possible. During emergencies, the Department has the role of coordinating operations, providing support for relief, sending field facilities - Advanced Medical Post - specialized teams of doctors and nurses, medical supplies and basic necessities. First aid is integrated, if necessary, with field facilities and medium-long term health care personnel.

The following are the main health emergency interventions in Italy and abroad, in which the Department took part independently or as part of missions coordinated by the European Civil Protection Mechanism.

On January 31, 2020, the Council of Ministers declares a state of emergency, for a period of six months, as a consequence of the health risk associated with Coronavirus infection. The Head of the Civil Protection Department, Angelo Borrelli, is entrusted with the coordination of the interventions necessary to deal with the emergency on the national territory.

Other emergencies in Italy

After the earthquake of August 24, 2016, health relief activities mainly concerned the relocation of injured people to hospital facilities in the four affected regions, also by elitransport. In this emergency, for the first time, the Cross - Central Remote Health Rescue Operations Centre was activated. During the emergency, the Svei, the dispatch form for the assessment of the immediate needs of the fragile and disabled people involved in the emergency, was employed.

Following the earthquake of April 6, 2009, the most significant damage to the local health system concerns the only hospital in the area, San Salvatore dell'Aquila, damaged to the extent that it led to the total evacuation of the structure towards other facilities in Abruzzo, Lazio and Marche regions. The health operations in the first few days focused on emergency actions of the 118, installation of the Pma, supply of medicines, health and psycho-social assistance, implementation of public hygiene and veterinary interventions..

Cile earthquake - 2010
On February 27, 2010 an earthquake with a magnitude of 8.8 on the Richter scale struck the Republic of Chile. Italy contributes to the relief operations with the installation of a field hospital in Talca, 240 km away from Santiago, which complements the activities of the regional hospital, which has been rendered partially unfit for use. The hospital is equipped for first aid with operating theatres, resuscitation and radiology, an analysis area and a 60-seat inpatient area. The hospital is donated by the Fatebenefratelli association, and is transported and installed by the Civil Protection Department.

Haiti earthquake - 2010
On January 12, 2010 an earthquake of magnitude 7.0 on the Richter scale struck the island of Haiti, near the capital Port Au Prince. Italy participates in the aid by sending a Pma - Advanced medical post with operating room, medical supplies, basic necessities, tents and other materials for the setting up of reception areas. Many goods are transported with the aircraft carrier Cavour, which with its on-board hospital contributes to the health activities on the island. The emergency surgery group of the hospital of Pisa, Ares Marche, the Regions, the Red Cross, non-governmental organizations and the Armed Forces collaborate with the Civil Protection Department.

On May 12, 2008, an earthquake measuring 7.9 on the Richter scale struck the Chinese region of Sichuan about 90 kilometers from the provincial capital, Chengdu. The Department of Civil Protection immediately activated with the dispatch of 240 tents distributed in the Sichuan province. A few days later in the town of Xiaude also sends a Pma of the University of Pisa, installed near the local hospital damaged by the earthquake, and made operational with the collaboration of Italian doctors and nurses.

On March 15, 2008 in the outskirts of the city of Vora, Albania, there was an explosion in the military depot involving the nearby town. Deaths and numerous injured, with burns of III°. The Civil Protection Department sends its staff to organize the transport, with flight C130, of 12 serious burns from the hospital in Tirana to the hospital in Brindisi - Serious Burns Centre, where they are successfully treated and then transferred back to their country of origin.

In the summer of 2006 Beirut, Lebanon, was hit by numerous bombardments. Italy opened a humanitarian corridor and sent, through the San Marco ship of the Italian Navy, about 500 tons of first aid goods - medicines, food, products and supplies for children, hygienic and sanitary materials, tents, beds and blankets -. With the goods arrive in Lebanon an ambulance donated by Anpas and a Pma of the University of Pisa. The operation involves the entire National Civil Protection System and takes place in agreement with the local government and international organizations active in the country.

Pakistan earthquake- 2005
On 8 October 2005, an earthquake of 7.6 Richter scale hit Pakistan, in the Kashmir region on the border with India. The quake had a very strong impact on the territory, causing more than 70,000 deaths, as many injured, destroying houses and most of the local health facilities. Italy responded to the request for help with the construction of a reception centre for displaced persons and a field hospital with triage, first aid area, operating room, patient reception area and pharmacy.

Ossezia Humanitarian Mission - 2005
On August 31, 2005, a commando composed of Chechen and Ingush terrorists broke into the school in Beslan, causing 340 deaths, imprisoning some 1,200 hostages, 170 of whom were children, threatening to blow up the school in the event of a break-in, and causing deep terror and anguish among the hostages. The Civil Protection Department is initially sending medicines and medical equipment and organizing a fundraiser to provide humanitarian aid to the population.

On January 9, 2005 a peace agreement ends the civil war between North and South Sudan. The conflict, the longest and one of the most dramatic on the African continent, has placed the region of South Sudan in an extremely critical condition. The Italian Government instructs the Civil Protection Department to start a humanitarian intervention for the construction of a Bailey bridge and, in collaboration with the NGO Doctors with Africa Cuamm, to make the Yirol county hospital functional and active.

Earthquake and Seaquake in South East Asia - 2004
On December 26, 2004, an earthquake with a magnitude of 9.1 on the Richter scale generated a tsunami that hit the coasts of the countries bordering the Gulf of Bengal, killing about 300,000 people. Italy participated in the relief operations from the very first days, and the population immediately responded with donations to rebuild hospitals, schools and homes in Sri Lanka. The Italian Government has entrusted the Civil Protection Department with the coordination and implementation of Italian interventions. On the health level, the main actions are the integration of the Matara hospital with the construction of an emergency room and the complete reconstruction of the Kinniya hospital..

Iran earthquake - 2003
On December 26, 2003, an earthquake measuring 6.6 on the Richter scale struck southeast Iran. The Italian Government responded to the Iranian Government's request for help, sending a team to search and rescue the population immediately. A few days later, the Civil Protection Department set up tents for the reception areas and an advanced medical post, provided by the hospital in Pisa.

Algeria earthquake - 2003
On May 21, 2003 an earthquake measuring 6.7 on the Richter scale struck Algeria, 70 km east of Algiers. The Civil Protection Department intervenes during the first aid and search for victims under the rubble, brings tents and materials necessary to set up reception areas and identifies, together with the local authorities, the most suitable areas for their installation.