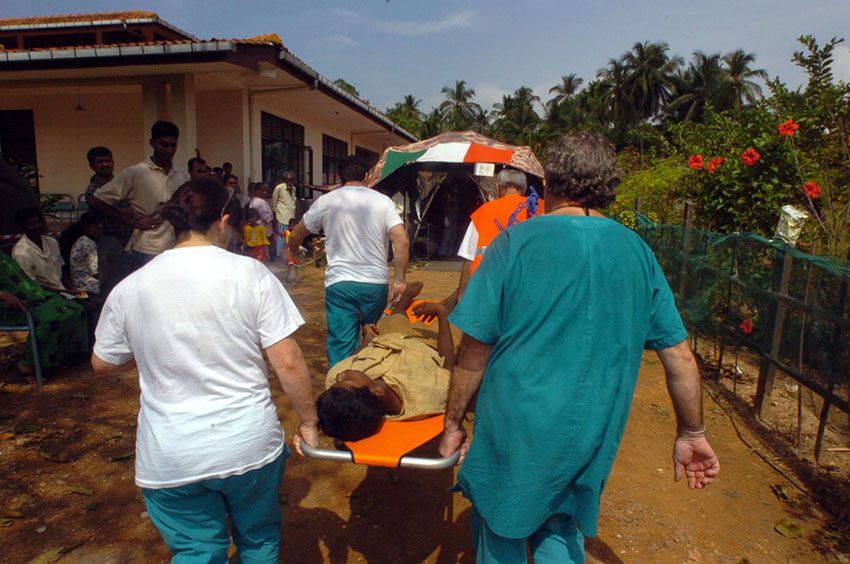 Over the past thousand years, tens of tsunamis - some of which destructive - have been reported along the Italian coasts. Eastern Sicily, Calabria, Puglia and the Eolie archipelago are the most affected coastal areas.

The most destructive tsunamis have occurred in the Pacific and Indian Oceans, where earthquakes with magnitude and frequence much higher than the Mediterranean ones can occur and where water masses are much larger than the ones of a closed and shallow basin such as the Mediterranean Sea.

In this section, we recall the strongest tsunamis of recent history, in Italy and around the world, focusing on the emergencies in which the Civil Protection Department was involved.

The oldest known Italian seaquake is the Vesuvius eruption that destroyed  Pompeii and Herculaneum in 79 AD and it is described by Pliny the Younger. Pliny reports that on the second day of the eruption a strong withdrawal of the sea in the Gulf of Naples left many fish dry on the beach.

In 1783, due to a strong earthquake, a landslide detached from the slope of Monte Campalla along the Tyrrhenian coast of Calabria, in the territory of Scilla (Rc). Scilla’s inhabitants  after the earthquake tried to seek refuge on the coast, but were hit by a tsunami that caused about 1500 victims.

The most disastrous tsunami of the last thousand years occurred on December 28, 1908. After the earthquake in the Strait of Messina (magnitude 7.1), coasts of eastern Sicily and Calabria were destroyed by waves with a height of over 13 meters. The tsunami greatly amplified the effects of the earthquake previously occurred, devastating the coastal area. Both earthquake and tsunami caused about 80,000 victims. Moreover, according to some reports, tsunami caused about 10,000 victims.

The most recent tsunami that hit the Italian coasts was triggered by the landslides occurred in Sciara del Fuoco of Stromboli on December 30, 2002.  Tsunami was heard in the Aeolian Islands, on the coasts of Northern Sicily, Tyrrhenian Calabria and up to the Salerno coast of Campania. It had significant effects along the coasts of Stromboli, where the waves reached their maximum heights. Waves of almost 10 metres have been recorded in the north-eastern part of the island, along Piscità and Ficogrande, where the tsunami caused the flooding of both the coast and the lower parts of Stromboli, causing damage to homes.

The strongest earthquakes in recent history that also caused tsunami occurred in Chile (1960), Alaska (1964), South East Asia (2004) and Japan (2011). There are also historical reports about landslides and volcanic eruptions caused by tsunami.

On May 22, 1960, Chile experienced the most violent earthquake of the 20th century, with a magnitude of 9.5. A tsunami wave followed the event. Earthquake and tidal wave killed about 2,400 people and caused serious damage. On the coast closest to the epicentre (Isla Chiloe) waves up to 25 meters high occurred 10-15 minutes after the earthquake. In Hawaii (Hilo Bay) the tsunami arrived 15 hours later, reaching a height of 11 meters. Six-meter waves reached the coasts of Japan, covering about 10,000 kilometers in 22 hours.

On March 27, 1964, in Alaska, an earthquake of magnitude 9.2 shook an area about 1,600 kilometers long and 300 wide, causing vertical movements of about 2 meters. The ensuing tsunami hit sparsely inhabited areas, causing 160 casualties and major damage in the Kodiak Islands, Vancouver, Hawaii and the states of Washington and California, where the waves reached heights of between two and six meters.
On December 26, 2004, a 9.1 magnitude earthquake off the coast of Sumatra resulted in the largest tidal wave in 40 years. No other tsunami in the past has caused so many casualties: more than 280,000. The waves have hit all the states surrounding the Bay of Bengal, also causing damage in Somalia, Kenya, Tanzania, Madagascar, Mauritius, Mozambique, South Africa, Australia. The tidal wave has crossed two oceans, Atlantic and Pacific, and has been reported in New Zealand, Antarctica and along the western and eastern coasts of South and North America.

On March 11, 2011, the strongest earthquake ever struck Japan occurred. An earthquake of magnitude 9.0 with epicenter off the Japanese coast produced a vertical shift of the seabed from five to eight meters and caused a giant tidal wave that spread throughout the Pacific Ocean, reaching the coasts of North and South America, from Alaska to Chile, where waves arrived two meters high. On the coast closest to the epicentre, waves up to 40 metres high fell about an hour after the earthquake. The wrong estimate of the height of the waves and the underestimation of the size of the tidal wave have meant that the damage and the number of victims have been many more than expected. In the Sendai area the water penetrated up to ten kilometres inland and in Fukushima the flood caused serious damage to the nuclear power station. Thousands of people within a radius of twenty kilometres of the plant have been evacuated.

On 27 February 2010, an 8.8 magnitude earthquake off the coast of Chile produced a large tidal wave that struck several cities along Chile's southern-central coast and caused minor damage even in California and Japan.

In 1883 the great eruption of the Indonesian volcano Krakatoa in the strait of the Sonda, between the islands of Sumatra and Java, gave rise to at least three waves that claimed more than 36 thousand victims. The waves reached a height of 37 meters and destroyed all the towns and villages along the coasts of the Sonda Strait. The energy was such that blocks of coral weighing up to 300 tons were transported inland.